on November 12, 2017
In my previous post, I talked about a ReactJS library of components that can be used to create Notes like UI. It allows developers to create modern web and mobile UIs in a flash. Fine but, if Domino Designer is a great tool for rapidly developing applications, it is unfortunately not designed to create such modern applications, mostly because:


We've been thinking about these problems for a while and we worked to provide a solution. Part of the problem comes from the fact that the NSF is both the development and the deployment container, with no third party development tool in the market being able deal with the NSF content. The on-disk projects were an attempt to fix that issue, but this is for source control only.

With Darwino, we go a step further: we allow developers to create projects using the tools they love (Eclipse, IDEAJ, Ms Visual Studio Code, Atom, ...), then use any of these tools during development and deploy the final result into an NSF.

Ok, better to first see it in action:


In this example, I used the Darwino studio to create a new ReactJS application within Eclipse and I'm using MS Visual Studio Code to develop the client side JavaScript. I can use source control, maven, npm, without any limitation, as I'm outside of Domino Designer. Moreover, the Darwino ReactJS library allows me to seamlessly call the Domino REST services, even though I'm running the Webpack dev server. Ah, you might have noticed, I did all the development on a Mac...

When I build the project by running maven, the relevant built files (JavaScript files, Jar files for the business logic...) are seamlessly deployed to the NSF, making the application instantly available from the Domino server. The source files are by default *not* deployed to the NSF, making it smaller and not triggering a build process when opened within Designer. Finally, your IP is also protected.

The magic behind that is a design element server installed right into Domino Designer, as part of the Darwino extension for Darwino Designer. This server exposes some REST services on port 8800: list of projects, access to design elements, ... These services are called by a client, like the Darwino studio in Eclipse, to deploy the runtime files when desired. Because it is all based on standard REST services, other clients, like pure JavaScript ones, can be developed as well. Seems easy right? Well, the evil is as always in the implementation details, but hopefully this is all written using the Darwino runtime, which drastically simplified the development.

The cherry on the cake: the code for these services is isolated from Domino Designer itself, so it could be installed directly within a Domino server. This would remove the requirement of using Domino Designer for development, at least when not developing"classic" notes applications -> it can enable a pure Web based Designer for citizen developers.

Let me know what you  think about it!

Configuring the project files to synchronize: 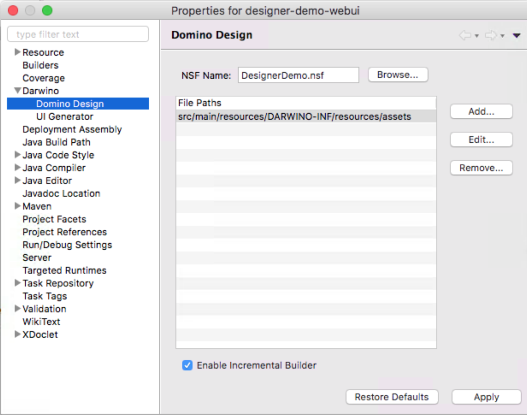